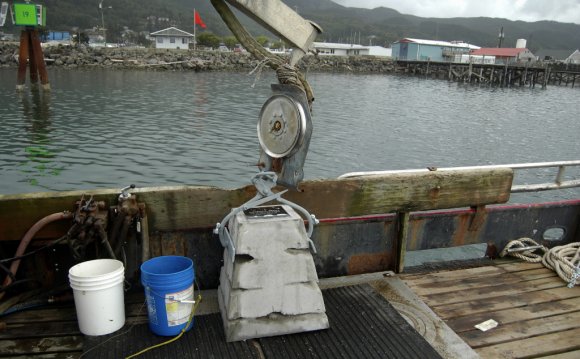 The ancient world is full of examples of burial customs that seem strange now, from Egyptian mummification to bodies dumped in bogs to departed Vikings launched out on ships-turned-crematoriums. But space constraints and environmental concerns are pushing modern man to explore new options for dealing with the dead.

The most recent of these to land on American shores is a process that uses heat, pressure and chemicals to liquefy a body in just a few hours, leaving behind sterile remains that can be poured into the wastewater system.

But unusual customs, from launching cremated remains into space to old-fashioned burials in hand-dug graves, are a growing trend. Here are some of the newest choices (not all eco-friendly) for the end of life.

Anderson-McQueen funeral home in St. Petersburg, Fla., is currently the only place in the United States where patrons can opt to have their tissues dissolved as an alternative to traditional cremation. The process, called resomation or "bio-cremation, " uses heated water and potassium hydroxide to liquefy the body, leaving only bones behind. The bones are then pulverized, much as in regular cremation, and the bone fragments are returned to the family.

The funeral home's resomation device is still being installed and tested, but calls are already coming in, said John McQueen, the president and CEO of Anderson-McQueen.

"We like to give all of our families various options, " McQueen told LiveScience. "And we do have more and more families every year that are interested in cremation but also in reducing the carbon footprint that they leave behind. This is a more environmentally friendly process than flame-based cremation." [Top 10 Craziest Environmental Ideas]

Three-quarters of Floridians currently opt for cremation over burial, McQueen said, but the natural-gas-fueled fire, which reaches temperatures of 1, 600 to 1, 800 degrees Fahrenheit (871 to 982 degrees Celsius), releases carbon dioxide as well as trace chemicals such as mercury from dental fillings. Resomation requires water of only 350 degrees F (176 degrees C) and takes the same amount of time as traditional cremation, McQueen said, so it's less energy-intensive. In addition, fillings and other medical implants can be removed from the bone before the liquid — now sterile — is dumped into the municipal wastewater system.

"It breaks the body down to the very basic amino acids, so there's no DNA, nothing humanly identifiable, left, " McQueen said.

The base price for cremation at Anderson-McQueen is $550, McQueen said, and resomation costs $650 (transportation, handling and other fees bring the prices for both procedures to about $3, 000).

Not so much a new invention as a return to old ways, natural burials are interments that take place without embalming and without the concrete vaults that line graves in most modern cemeteries. Bodies are wrapped in a shroud or placed in a biodegradable casket, the idea being that they will decompose naturally.

The natural burial movement started in1998 with the opening of the all-natural cemetery Ramsey Creek preserve in Westminster, S.C., said Mark Harris, the author of "Grave Matters: A Journey through the Modern Funeral Industry to a Natural Way of Burial" (Scribner, 2007). Today, Harris told LiveScience, there are at least 50 natural cemeteries in the country, and "scores more" regular cemeteries with sections for natural graves.

The movement is driven by dissatisfaction with typical funeral rites. "Most people, when they find out what happens in the embalming room, they're pretty horrified, " said Harris, who blogs at grave-matters.blogspot.com. "They can't believe the cost, which is outrageous, and then there is this growing concern about the environmental effects of all of these procedures and of all of the goods and resources devoted to this modern method."

In addition, Harris said, many natural cemeteries double as nature preserves, and many people like the idea of contributing to the ecosystem after death.

For those who prefer to nourish a more aquatic environment after death, there's also the Eternal Reef option. Georgia-based Eternal Reefs creates artificial reef material out of a mixture of concrete and human cremains (the crushed bone left over from cremations). These heavy concrete orbs are then placed in areas where reefs need restoration, attracting fish and other organisms that turn the remains into an undersea habitat.

Cremation isn't as green as natural burial due to the combustion process, Harris said, but he is a fan of Eternal Reef burials.

"It's a terrific opportunity not just to return to an aquatic environment, but to produce new life under the sea, " he said.

And then there are those who would prefer to hang on to their old life, thank you very much. For people with that attitude (and large pocketbooks), there's cryonics.

Cryonics is the process of freezing a person's body in the hopes that later medical science will make it possible to revive them, personality and memory intact. Despite the numerous barriers to this, including the toxicity of chemicals used in an attempt to prevent damage to cells from freezing, advocates have promoted cryonics since the late '60s. According to the Cryonics Institute, there were just over 200 people in cryonics storage in the U.S. as of August 2011. [Top 10 Immortals]

Prices vary depending on the procedure, preservation company and payment plan, but can range as high as $200, 000 for whole-body preservation. Cost-cutters can have a head-only preservation for around $80, 000.

If cryonics sounds too expensive, but you'd still like the afterlife to smack of sci-fi, you can always get some of your ashes shot into space. Your cremated remains will hitch a ride on a rocket already headed for the stars, a journey that is more symbolic than practical: Because of the high cost of spaceflight, only 1 to 7 grams (0.04 to 0.25 ounces) of remains are launched.

According to Celetis Memorial Spaceflights, a company that offers the postmortem flights, a low-orbit journey that lets your cremains experience zero gravity before returning to Earth starts at $995. A chance to orbit Earth and eventually burn up in the atmosphere runs around $3, 000. Dedicated space-lovers can have themselves launched to the moon or into deep space for $10, 000 and $12, 500, respectively.

It's not just for ancient Egyptians anymore. A religious organization called Summum, founded in 1975, offers mummification services to both people and pets. Before his death in 2008, Summum's founder Corky Ra told CBS News that at least 1, 400 people had signed up for eventual mummification.

Summum's representatives are currently not granting media requests, but Ra told CBS that the price of human mummification starts at $63, 000. Like believers in cryonics, Ra and those like him hope that their preserved DNA will enable future scientists to clone them and give them (or at least their genes) a second shot at life. Ra put his money where his mouth was: After he died, he was mummified and is now encased in bronze in Summum's pyramid in Salt Lake City, Utah.